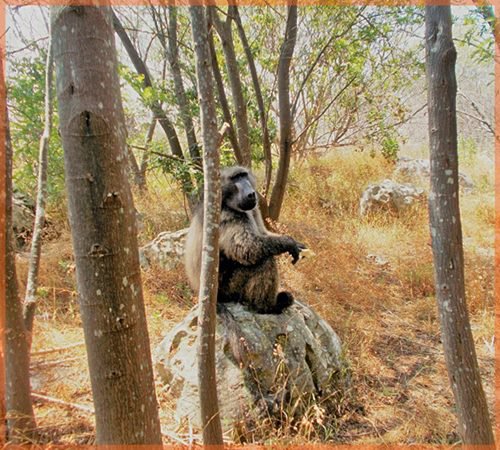 Are there baboons on Table Mountain?

Not officially. Nor according to the Cape Peninsula troop range maps one can find. But twice this week I've heard of sightings of baboons near Cecelia Forest, the Overseers Cottage & Constantia Nek.

Some older Capetonians can recall baboons hanging out in Newlands decades ago, though I've never spotted any on the main and back part of the mountain..

Several troops live in the greater Table Mountain National Park. Some of them roam the peninsula's peri-urban districts. You'll see they've been around recently if garbage which has not been properly secured lies strewn about.

Such human constructs as rubbish bins, or boundaries around farms, national parks and dwellings mean little to them. Open windows or doors are tempting. If they take the gap, and there's grub left out and you aren't there to object, they’ll tuck in. I once saw a troop invading a house. The occupants were out. The baboons ripped into nearly everything except the whiskey; and had the added good taste not to touch a large pink wedding cake.  Apart from the defecation, it was good clean fun. Like King Louis' Jungle Book party. Opportunism is a strong part their evolutionary success. But it prompts even normally sober publications like National Geographic to pen headlines like ‘Baboon Gangs Run Wild in Suburban South Africa.’

It's due to such 'gangster' labeling that the approximately 350 - 500 baboons that live around Cape Town pay the price of human outrage, and suffer official attempts to ‘manage’ them.

Until recently the city of Cape Town contracted about 60 field rangers to keep the 12 baboon troops in check. Using methods like 'removing' problematic offenders they attempt to prevent baboons from straying into residential areas or orchards. Some are said to physically harass people carrying food. Down at the Cape of Good Hope I saw a kid who was not carrying food get baboon-grabbed. It seemed like a passing moment of leisurely intimidation.

Do baboons ‘run wild’ when foraging for food?

Researchers say that baboons will, before moving into human-held territory, check out the lie of the land, see how many people there are, and whether they are men, women or children; then calculate their next move in the daily forage. Any available high energy food resources, like crops, fruit or highly processed carbs such as bread is valued highly. They will even put up with a few duck slaps in exchange for eggs.

Scoring eggs or a loaf allows them to relax and enjoy the rest of the day, instead of having to keep up the quest.

They may seem to be running wild, but this is how they have evolved - nimble, dexterous, and good at problem solving. Humans often have to change modes of deterrence because baboons are great working-arounders. 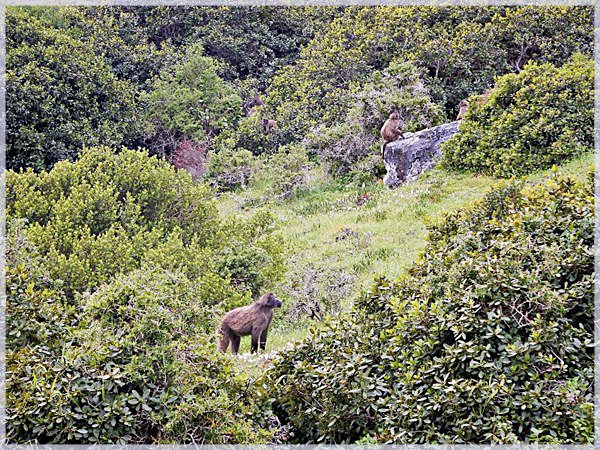 Why no baboons on Table Mountain proper?

Apparently the kind of food favoured by the local chacma baboons - fruits, flowers, berries, bulbs and roots - is mainly got in the lowland, and whatever can be foraged in the inter tidal zones, like at Cape of Good Hope Nature Reserve. They particularly enjoy mussels, crabs and limpets.

But elsewhere, being highly adaptive, some chacma troops have worked out ways of surviving in higher reaches of the Cederberg, the Drakensberg, and in deserts.