In a post-cryosphere - when the icy parts of the planet melt - would arrival at Table Island have been at Platteklip Harbour? 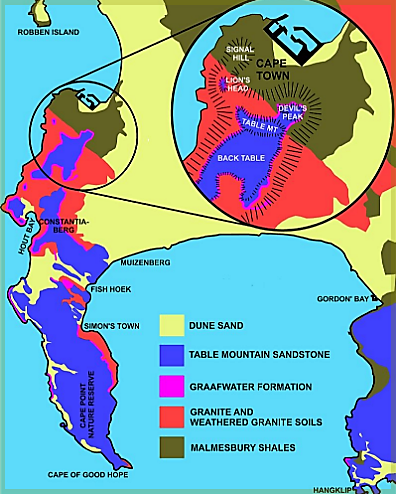 In the beginning there was shale ...

Starting some 800 million years back, it's a tale of magma up-wellings from the earth's hottest depths. Of the toings-and-froings over eons of continents adrift; when Pangea fragments inland seas form in which granular sedimentary layers stack up eight kilometers deep and compress into sandstone. (Table Mountain rock weathers away slower than most.) Another continental collision follows. The land folds. The Mountain forms.

To see how geology correlates with plant life see the map below. 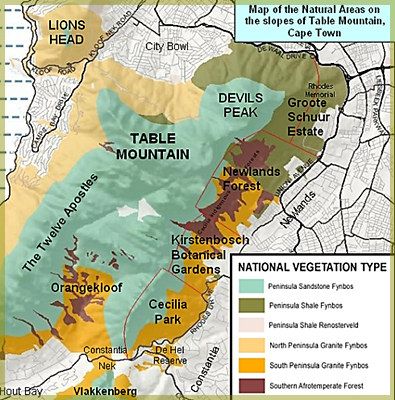 Botanists have long been dazzled on first encountering the Cape Floral Kingdom. The region is comparatively tiny, occupying 0.6% of the world’s six Floristic Kingdoms' landmass.

It’s an often-windy region, with long, arid summers. Its gritty, acidic and leached soils are of limited nutritional value, and often the richer topsoil layers get washed off in heavy winter downpours.

You wouldn’t expect much to grow here, and ecophysiologists admit that their models fail spectacularly in this environment. They don't expect it to be as species-rich. Instead, the Cape Floral Kingdom’s diverse floral expression is more in keeping with what you’d imagine finding in tropical rain forest regions. About 9 000 plant species are found here, representing 3 percent of the world's total.

And Table Mountain is in the thick of it.

This diagram is artist and architect Paul Andrews' impression of 'urban design concepts' to secure various sub-systems of The Table Mountain Aquifer - which is part of the greater Table Mountain Aquifer Group. It extends far beyond the peninsula. Its groundwater comes out of various city and mountain springs.

But first, rain has to seep into the subterranean networks of cracks and caverns which transmit and store the groundwater.

THE SPRINGS OF TABLE MOUNTAIN Historically there were over 30 springs in the City Bowl. Depending on the amount of recent rain, sometimes water rose out of the ground without need of pumps.

In recent times five of the springs still yield 5.9 million litres of water daily. Most of it ran out via underground rivers into Table Bay. However, since the 2017 drought the Main Spring now feeds Molteno Reservoir with 2 million litres a day.

In 2019 the City of Cape Town reinstated another old pipeline from what they call the Cloete and Cannon Springs in Newlands Forest. (There seems no reference to these springs to be found on the internet.) Adding 4 million extra litres a day to the city's bulk water supply, the new pipe will 'divert surplus spring water from just after the spring sources during the rainy season. The springs will remain visible and accessible.'

Another source of spring water runs through the fynbos gardens of Green Point's Urban Park.

One stream runs beneath The Little Theatre in Gardens. During performances a noisy pump in the orchestra pit is turned off, and after the final curtain the stage manager has to turn it back on again to prevent the theatre from flooding.

But many of the other rivers and springs may never be rediscovered. Rubble, concrete and old bones have seen to that. Before the 2017 water crisis the City of Cape Town had only 13 springs on their records. Parliament is sitting on two springs. 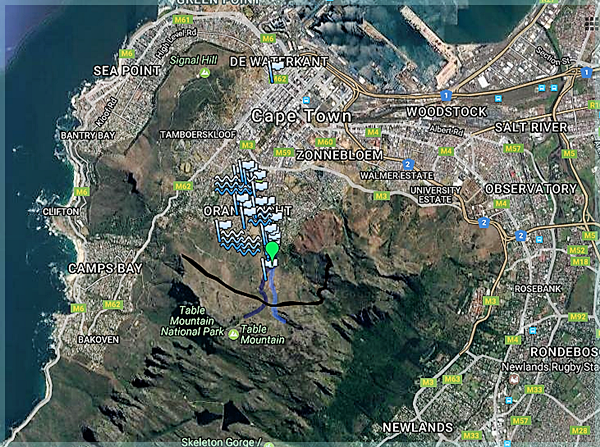 Talking of water, one of the shabbiest municipal charms the City provides is the Turkish Baths in Long Street. Back in the day its plunge pool was fed by constantly running chilled mountain water. After a morning of steam and soaking, one's skin never felt more silky and snug. Until of course some tenderer 'upgraded' the pool. A pump was installed needing chemicals. The water became murky. The big brass pipe is still there waiting to reconnect us.

Which brings us to this map. Created by public participation, it is part of a visionary project - Reclaim Camissa. "Camissa meaning 'the place of sweet waters' is the ancient Khoi name for Cape Town. Embedded lost and obscured within the city's fabric this vital ecological link still exists."

Founder Caron von Zeil envisions bringing a progressive water management strategy to the city. A model to help the transformation of Cape Town into an equal society for everyone. 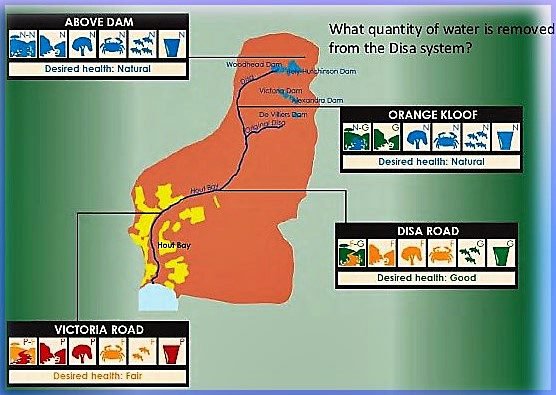 On the Back Table frogs bask in the clear, tea-red waters of Disa Stream. Yet just a few kilometers downstream, once it joins the Hout Bay River, it has become a murky mess. Several years ago word was that it had the highest e-coli count in the country. Bathers on the beach complained of its harmful effects.

Read the history of water in the Cape Colony and the building of Table Mountain's dams:http://new.capetrekking.co.za/information-notes/woodhead-dam-reservoirs-table-mountain/

More useful stuff about the river to be had here.

FRIENDS OF THE RIVERS OF HOUT BAY 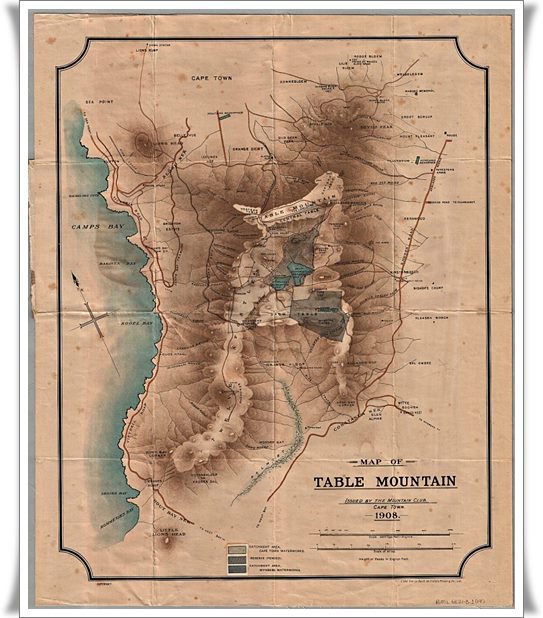 Prepared by The Mountain Club of South Africa this shows the coastline from Sea Point to 'Kommetje's Bay.' Features include the Back Table, Orange Kloof, Victorskloof or Kronen Dal and Modder Gat.

Major water sources on the mountain are Woodhead Reservoir, Hely Hutchinson Reservoir - and the Wynberg Reservoirs - now known as the Alexandra and Victoria dams, as well as the Molteno Dam. Also marked is that other great watering hole - Foresters Arms. 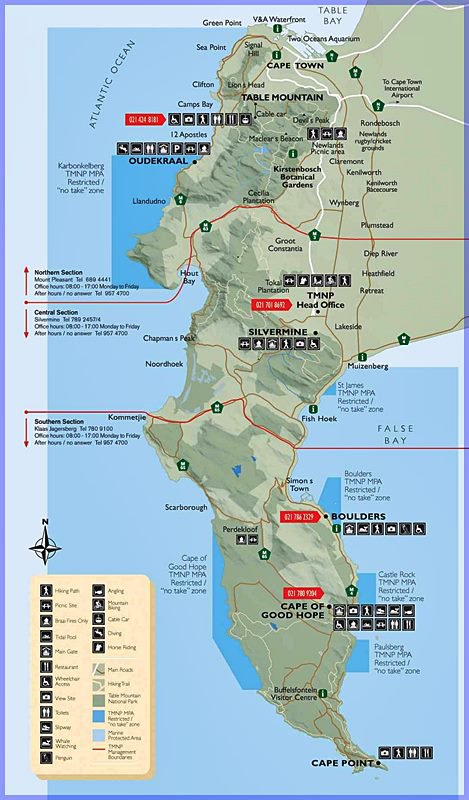 "I’M SO BORED" in this town doesn't wash. Except when it rains. (But don't expect the Cape Stormers in current 2017 form to keep you charmed indoors.) Wheelchair upon a Natural Wonder

The Table Mountain Cableway has wheelchair access. This map shows you the routes along which you can roll once you are up there, to take in the views.

Note that the map has north at the bottom. 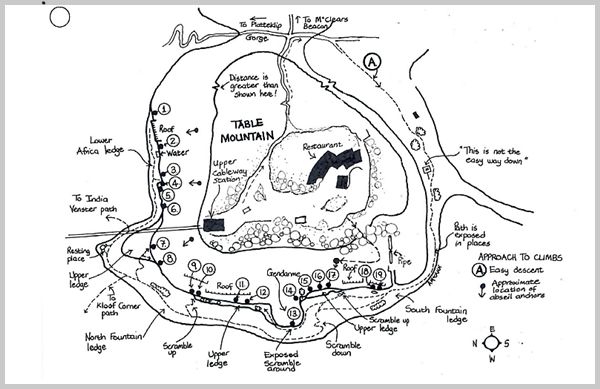 Adele McAnn's Cape Classic Climbs has a series of nineteen Table Mountain maps of carefully and quite beautifully drawn routes up the trickier parts of the Western Table.

Just above from where you'd dangle, about 800 thousand visitors a year amble more prosaically in anything from designer shoes to slip-slops. 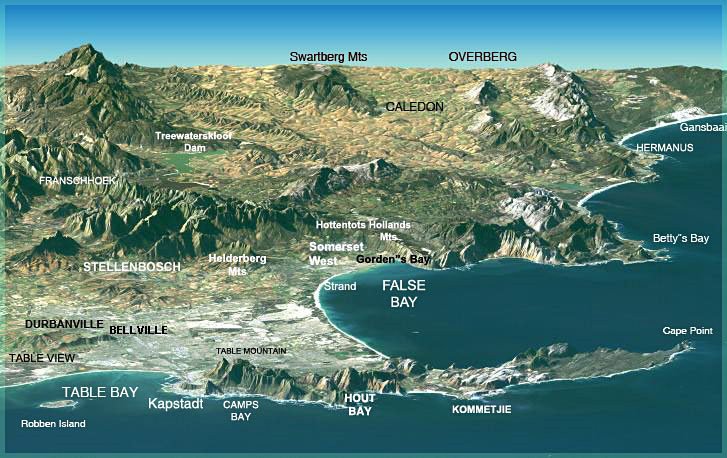 Table Mountain’s towering cliffs add dramatic effect to what is actually not such a high mountain.  Peaking at 1086 meters it is the first ripple in ranges of folded massifs that were created let's just say a long time ago.

When the Cape Doctor has blown, you can see out beyond the Cape Peninsula, to those far bigger bergs with similar geologic DNA to Table Mountain. 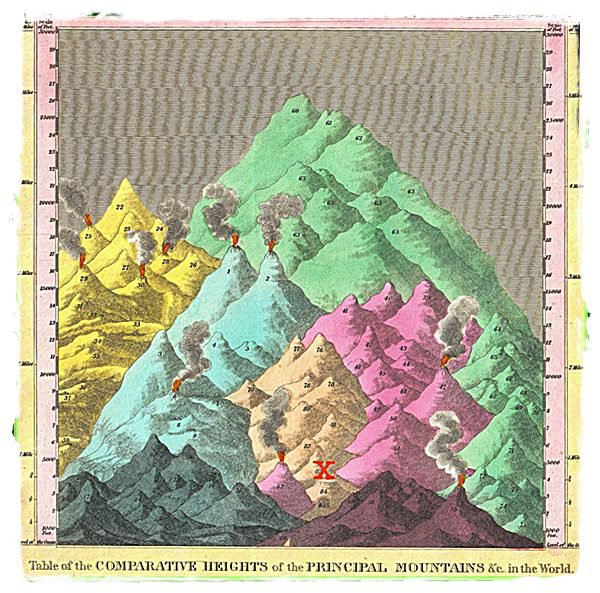 Comparative maps of landmark mountains were all the rage in the 19th century. The biggest beast at the back is Dhaulagiri, in Nepal. They hadn't yet worked out the height of Chomalangma, later called Everest. But Dhaulagiri took longer to conquer - 1960.

Back to Table Mountain. X marks the spot. 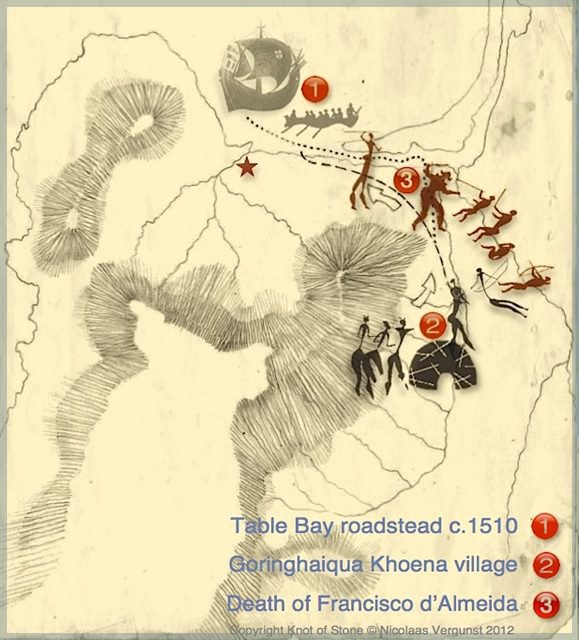 In 1510, writes Nicolaas Vergunst, a Portuguese expedition of dispossession (of Khoikhoi children and non-human animals) led by Francisco d’Almeida landed in Cape Town. A battle ensued near Devil's Peak. Almeida and several of his men were killed. 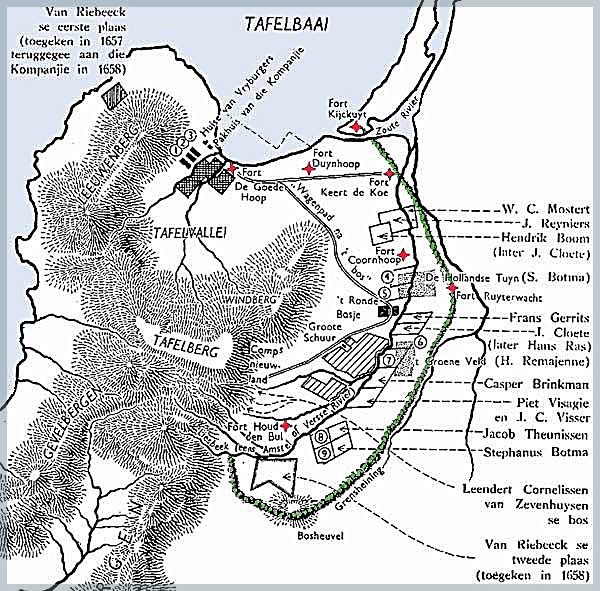 Soon after the Dutch established the colony, van Riebeck stuck a hedge around it. Twenty-five km of wild almond trees provided a multi-branched horizontal tangle of stout trunks, made more impenetrable by brambles.

Why? To keep cattle which the settlers regarded as theirs from straying. Or being reclaimed. 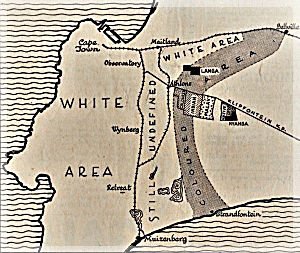 This 1950 map illustrates the group area proposals made to the Land Tenure Advisory Board by the Planning and Reference Committee appointed by the Government. 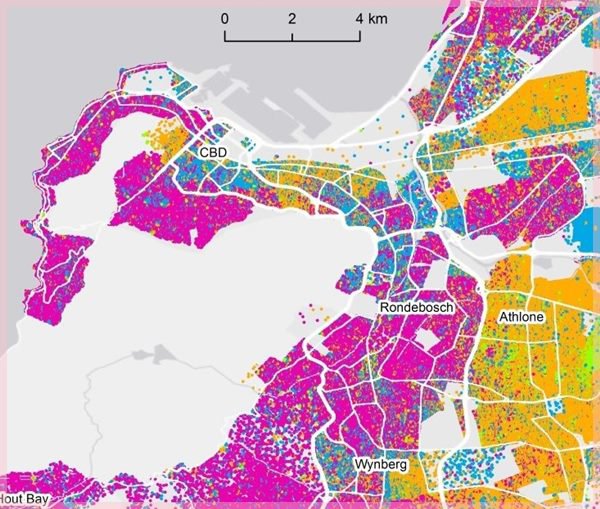 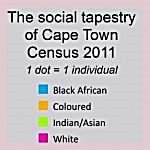 In a local survey: 'Cape Town in 2050  - what does the future hold?' mapmaker Chris Berens turns up the heat.  This chart enters the spirit of the Post-Truth moment that's helping to drive our swift drift into the Anthropocene. 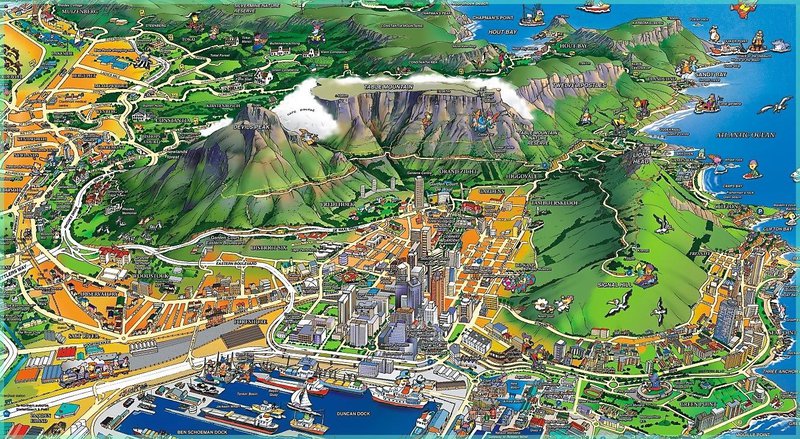 The rights holder and original artist are indistinct on this copy. It was created in 2007. I'd be pleased to hear from them so as to place an acknowledgement here; less so get a take-down notice because so lovely a map to finish off here with there cannot be.