Official responses in the immediate aftermath of the Silvermine attacks seemed like panicked public relations exercises. Table Mountain National Park put out confusing reports about having arrested the suspects, when it seems they were in fact reporting earlier arrests. And like swatting at a fly with a club, a large contingent of SAPS motorbike cops patrolled Tafelberg Road.

Meanwhile another crime was committed with even more terrible results.

Since then the differences between key players (mentioned in the post below) have been put aside and a coalition of 40 organisations of interested parties has been formed to fight crime on Table Mountain. Also involved are Neighbourhood watches that service suburbs near the mountain. (See their contact details below.)

The new approach is to secure the urban edge that borders the mountain, the line and specific hot-spots which  criminals would have to cross. Of particular importance is to identify entry and exit points. The logic behind this is that once anyone with criminal intent is in the park, they are much more difficult to track.

The two-tier strategy is that users are taking responsibility for their own safety, says Andre van Schalkwyk, of Table Mountain Watch, in a radio interview with John Maytham. The second part of the strategy is to integrate these strategies with existing forces - the Table Mountain National Park, SA Police and the city police.

That this is already bearing fruit is the reported (unverified as of midday 05/02/18) arrest of those behind the most recent crime on Noordhoek Beach which involved helicopter tracking.

For an in-depth guide as to how to keep safe from crime while hiking, this is worth a read.

Security companies that will assist if possible

No hiking guide would knowingly go into risky territory. But even if you avoid the obvious, or even vaguely possible hot-spots, safety is never guaranteed. However, some of the nicest hiking on Table Mountain areas are not among them. Yet. 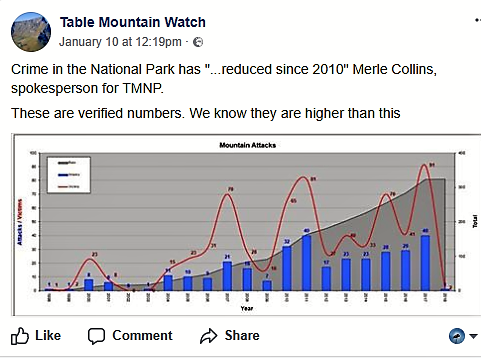 Crime on Table Mountain, mainly muggings, has surged over 2017. We have been through this before, and the numbers came down, though briefly.

Can the present situation stabilise?

A Table Mountain ranger recently told me that he and his colleagues felt threatened. That they were being targeted.

This probably means that he is under resourced. No-one should feel this about their work. Until those on the front line feel confident, the present situation will not change much; certainly not as fast as it could, and if everyone was on the same page. But they are not.

There is clear antagonism between some main role-players - Table Mountain National Park, and Table Mountain Watch, an organisation which goes as the ‘the eyes and the ears of the mountain.” Judging by remarks between them on the radio today, they no longer sit on the same key forum together.

After the recent knife attacks at Silvermine, and with key players not talking to each other, the other BIG question on everybody’s mind is, should we hike on Table Mountain at present?

If visitors are asking this of the major tourist attraction in the city, they might then ask why visit Cape Town at all?

Violent crime is an integral part of daily life in many parts of South Africa, including Cape Town. Statistics tell of most crime being committed in economically stressed neighbourhoods. But it is bound to spill into areas of high tourism in Cape Town. A recent report tells of a hiker on the most popular hiking route on the mountain being victimised.

And the mountain is not the only tourist attraction being hit. This week there have been attacks on beaches, and malls. Admittedly, the latter was politically motivated.

Table Mountain is not just another drawcard. It is THE attraction. It is also a thermometer, an economic bell-weather. If Table Mountain becomes increasingly not safe to visit, would people flock the world over to this city to shop at the Waterfront? No. Maybe they'd visit Cape Point and the wine lands. But if fewer people come to Cape Town because of Table Mountain crime, then shopping halls, vineyards, and even relatively safe Cape Point will all suffer.

Securing Table Mountain is vital beyond just the mounting numbers of individual victims directly hit. It could have broader, far-reaching consequences.

No hiking guide would knowingly go into risky territory. But even if you avoid the obvious, or even vaguely possible hot-spots, safety is never guaranteed. However, some of the nicest hiking on Table Mountain areas are not among them. Yet. 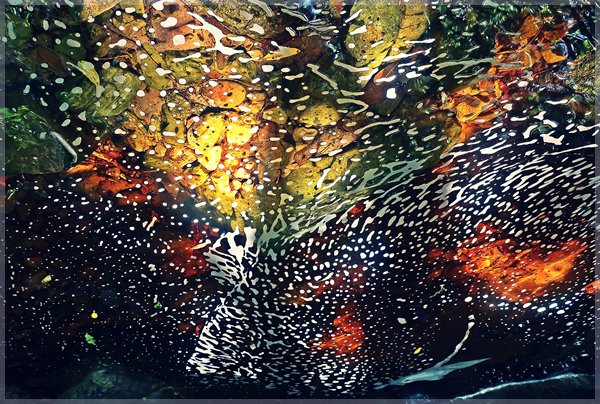