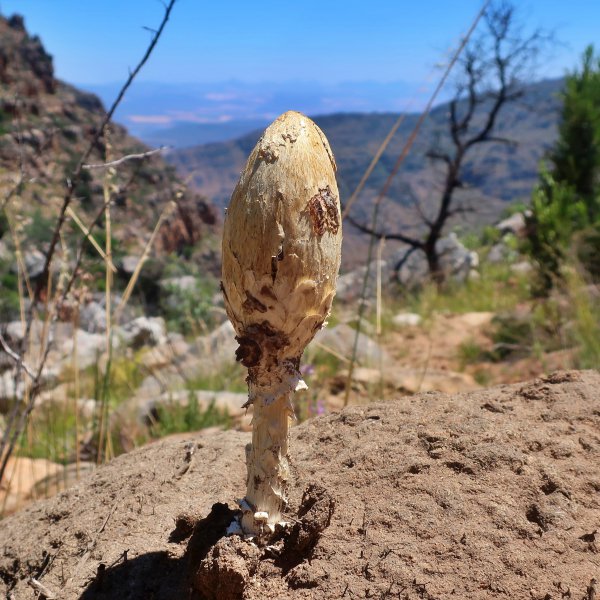 On trail in the Cederberg Wilderness Area recently we came upon this ... thing. It it was sticking out of a termite mound, those hard perforated heaps dotted around sparse terrain, and on trail seem like inconsistent milestones placed by drunk-ish creators.

But what was poking out of this mound in a back-route valley between the Dome and Middleberg North? I initially thought it was a weird, hardy parasitic. It became clearer - mushroom.

But aren't they wet season things, not good in hot dry conditions of a Cederberg summer?

Back home an internet search reminds one that termites rely on fungi for sustenance. The mounds themselves don't house the main nest; that's below ground level. The hard domes exist as as ventilation systems. They regulate temperature of their subterranean homes not just to keep the termites themselves cool (the thermometer that day reached around 40 degrees C). But also to keep the temperature constant for the fungi that they farm.

The fungi need to be kept below thirty degrees Celsius. If the temperature rises above that, the termites start making more holes in their heaps. When too cold the worker ants block up the holes.

National Geographic explains fungi as being the ‘external stomach’ of the termite. They produce enzymes which help termites digest dry plant matter. In return the fungi get food, water, shelter and protection.

Looking into the Soul of the White Ant

Leaving the internet, I returned to the first and only book I’d read on termites. It was written by the naturalist and poet Eugene Marais at the turn of the last century.

Nowadays Marais might be termed a citizen scientist. He was it seems the first to describe (to westerners anyway) each mound as being a single organic entity. For instance, each termite he saw as something similar to a blood cell flowing through the organism.

His account is to be found in The Soul of the White Ant. The book is an iconic literary remnant. As mystical as scientifically enlightening.

Marais’ empathy for termites and all living beings arose from painstaking observations. His idea that we should regard each mound, or ‘temitary’ as he called them, as a ‘composite animal’, also fired up his critics’. This was probably less to do with his notion’s scientific merits than its moral implications regarding our relationship with the natural non-human world.

Whatever the book’s scientific flaws (Marais was a lawyer by training) the work was original enough. He also realized the importance of fungi as part of the termitaries’ digestive system.

The book was inspiring too. A famous European poet adapted it, and claimed as his own the idea of termite nests being a living organism - a notion later taken up by Richard Dwarkins.

Marais' book talks not of mushrooms, though.

It took Justin Williams, @the_mushroom_forager to point out that it is Podaxis beringamensis. Other sources call it Podaxis pistillaris. Of Australian origin, not much is known of their natural history according to one study. 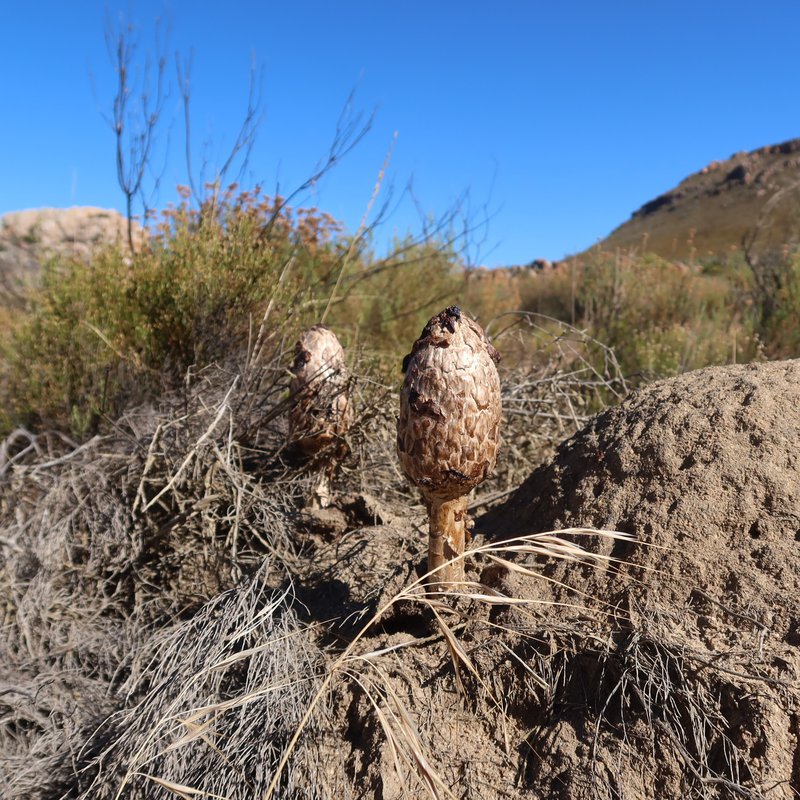 The same paper reports that some southern African termites may find the symbiotic odds unacceptable. With the mushroom poking through their mounds and exposing them to pathogens and predators, they build mounds with chemical added to the nest walls that prevents the Podaxis's growth.

The same study lists dozens of locations in South Africa where specimens of Podaxis have been collected since 1911. (Another contributor on instagram reports them currently all over the Kruger Park.) However the Cederberg is not among these spots.

Illustration source: The Soul of The White Ant

For more info on Cederberg hiking, please see this page.