The creation of reservoirs on Table Mountain was environmentally damaging. But it was vital for the survival of the city's early burgeoning settlement. Here is the story. 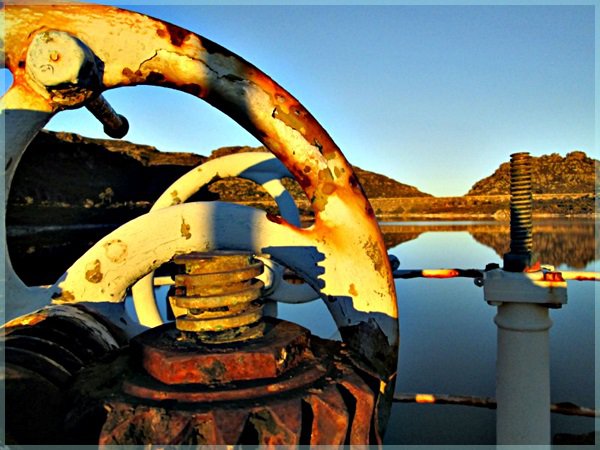 Water was a key factor in the European's decision to establish a settlement in the area now known as Cape Town.  There were numerous springs and streams. Flowing into Table Bay from the mountain's front cleft, currently called Platteklip Gorge, was a river. It was named by the 1652 Dutch arrivals, Varsche Rivier, meaning 'fresh river'.

The first wooden fort erected by the Dutch East India Company was at the river's mouth. It can be seen in this sketch below by Peter Mundy, but oddly, is dated 1634. 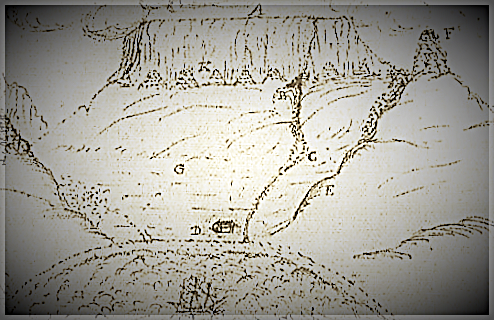 Apart from providing the Khio-khoi and wildlife, the Varsche supplied the colony and passing ships fresh drinking water. It is said that two entrepreneurial indigenous locals, referred to as Watermans  had been providing ships with fresh water.

But how fresh? Because soon the name 'Varshe' would lose its literal meaning.

A chapter in Megastructures and Masterminds, by Tony Murray, tells how in 1660 Jan van Riebeeck, the first European governor, installed irrigation furrows, and dug deeper into the stream-bed. It soon became a canal, or a 'gracht' that flowed into Table Bay.

Near the jetty there, a small dam was built to make it easier to fill water casks. Ten years later a cistern was constructed. Soon a network of canals crisscrossed the growing Cape Town. Their remnants can be seen on display in the Golden Acre shopping centre. It's apparent in street names - 'Heerengracht' / 'Buitengracht.'

Windblown dust and dirt from the settlement rendered the river’s water undrinkable. Governor Willem Adrian van der Stel laid pipes from the foot of the mountain to a fountain in town. The supply was augmented by a well in Greenmarket Square. Slaves went to fetch household needs at various public water points.

There were other sources; water gurgled up from springs, or was drawn from those that only gushed and seeped with the seasonal rain that re-charged peninsula-wide aquifers.

The role played by pathogens and water-borne disease in human health was soon to become clearer. Yet finances were still not made available to curb the stench of open sewers.

A century and a half European colonization had passed by the time the British took over. They built a reservoir in Hof Street, near present day De Waal Park. It held quarter of a million gallons, or 946 352 litres. It flowed out via a main pipe down Long Street. But Platteklip’s river started to dry up. A new reservoir was needed to harvest winter rain.

A drought hit the region in the late 1870’s. Water was released to households only every second day for three hour periods. In the mean time, in 1880, the Molteno Reservoir was completed. But scant rain fell, and the new reservoir remained 40 million gallon (150 million litres) empty.

There would have been frustrated engineers who looked up to the back of Table Mountain where Sir Percy Fitzpatrick hiked up one February. On the Back Table, at the future site of Woodhead reservoir, he is said to have commented that red disas covered it like a scarlet blanket.

Not for much longer. 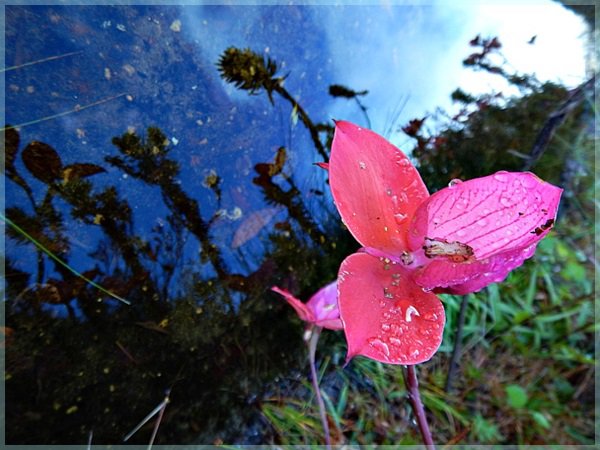 By the late 1880s it was realized that a dam would have to be built on the mountain.  A young Scott, Thomas Stewart, the engineer behind several Cape water schemes, including a reservoir behind Table Mountain at Constantia Nek, was commissioned.

He planned to dam the Disa River that feeds the gorge river that flows into Hout Bay. The water would be diverted into a tunnel. 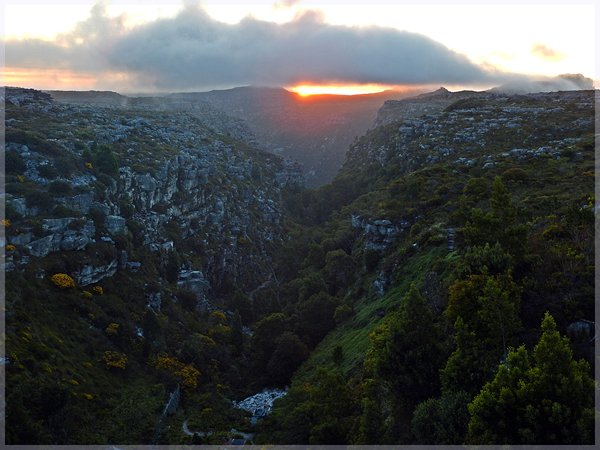 John Gamble, a young Oxford-trained irrigation and water supply adviser in the Cape, identified the back plateau of Table Mountain as the best catchment area. He planned to pipe water off it, tunnel through the mountain's western flank known as the Twelve Apostles and pump it along its base into the Molteno Reservoir.

Gamble left the colony before action was taken. The plan was revived by Thomas Cairncross, the newly appointed City Engineer in 1891. Water from the Disa River, flowing from the Back Table, was diverted from Disa Gorge, into the a tunnel (as still happens today though through a new tunnel, the Apostles, which opened in 1964.) 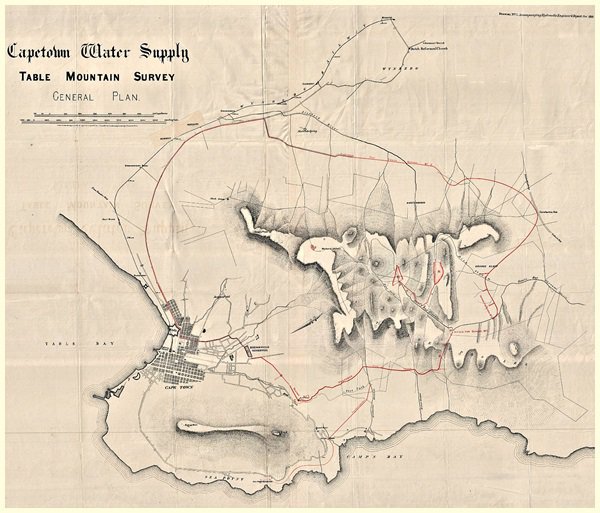 According to this map it seems that the original planners envisioned two dams. The dam marked 'P' is more or less where Hely-Hutchinson was built. The first dam to be built is not yet envisaged in its current spot. 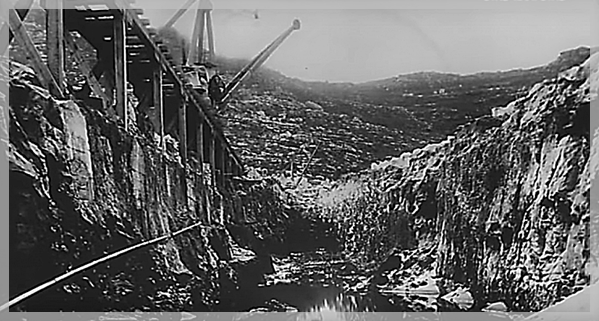 No undertaking of this sort had ever been done in South Africa. Scottish stonemasons and quarry men and machinery were brought over. Material lugged from Kloof Nek along the Pipe Track was hauled up a cable way rigged up Kasteelspoort. It took the heavy gear, like equipment, tools, coal and cement, that couldn't be portered up the steep ravine.  The local labourers who provided the basic grunt work found the Scot's accent difficult.

At the top accommodation for five hundred workers had been set up, as well as a bank, post office and a football field.  Rail tracks were installed to the building site.  Mules pulled laden trolleys along them.  In 1894 foundations deep into the mountain were excavated.

There was no such thing as poured concrete back then. The Back Table resounded with the sound of blasting as the sandstone blocks were extracted from the mountain itself. They were hand chiseled and dressed by a team of master masons.

The dams' construction meant that the disa's principal habitat was destroyed. But while we have been deprived of the sight of the Pride of Table Mountain at its most fecund, Red Disa spotting is now thrilling for their rarity.

With Cape Town's population booming a second dam was planned. Stewart regathered to build the Hely-Hutchinson (named after the governor of the Cape) and three smaller dams. Instead of mules, a locomotive was brought up and assembled, and called the Mount Meg. It is still on the mountain housed in the museum near the Hely-Hutchinson.

The Hely-Hutchinson, after a delay because of the Anglo Boer War, was completed in 1904.  But already it was apparent that new far bigger dams, beyond the city, were now going to have to be built.

Currently the five completed dams on Table Mountain are capable of piping down less than one percent of Cape Town's needs.

Below: At the base of Woodhead Dam Wall adjusting outflow. 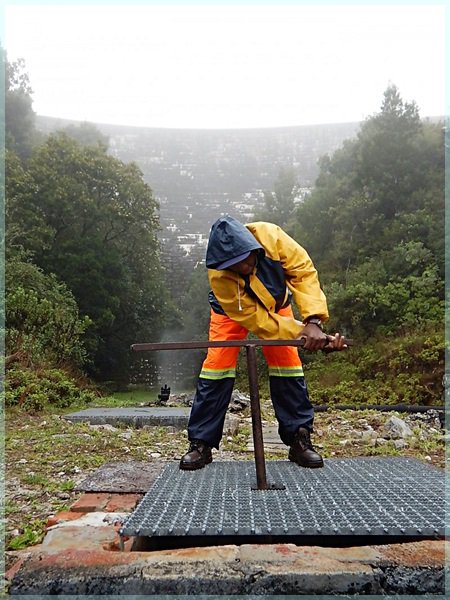 Below: Woodhead outflow into Disa Gorge 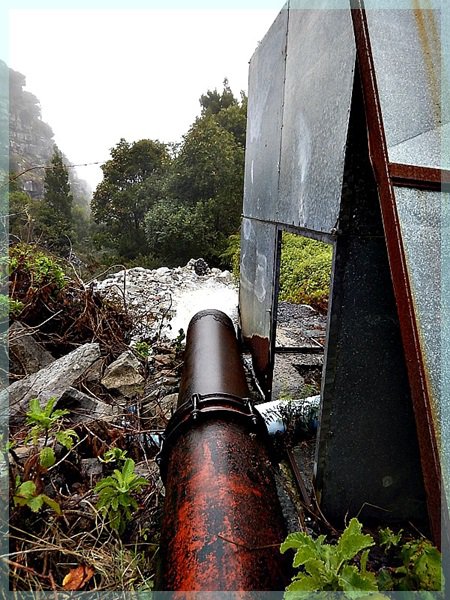 Below: Diverting flow from Disa Gorge in to tunnel through to Pipe Track 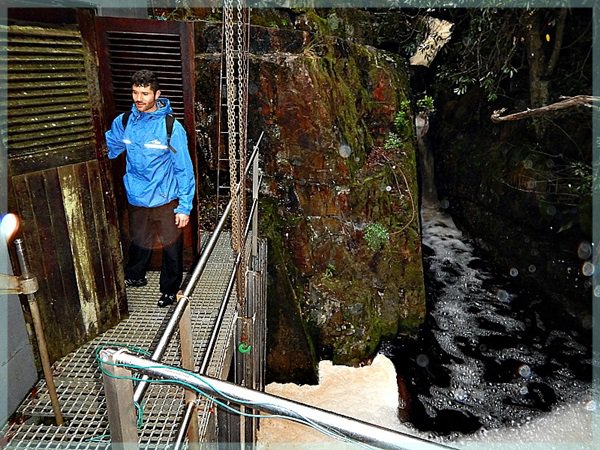 Above: Entrance to the Apostles Tunnel constructed in 1964 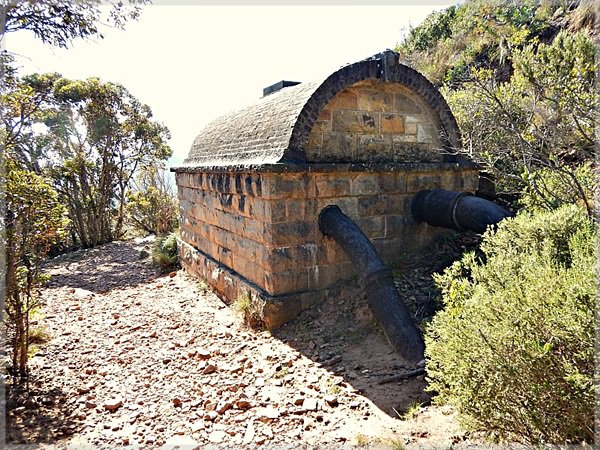 Above: Water pumping structure on the Pipe Track

What lives in Table Mountain's Resevoirs?

The Woodhead Dam as well as other reservoirs and lakes in fynbos-land have little in the way of noticeable life.  Tannin, from leaves, roots and stems, and chemicals that make the fynbos unpleasant-smelling to browsing animals, leach from decomposing plants and turns the mountain water acidic. The water in Table Mountain reservoirs is, says The Fynbos Guy, "basically, weak carbolic acid. There is freshwater life but it's highly specialised, with much lower biomass than 'normal' wetlands." 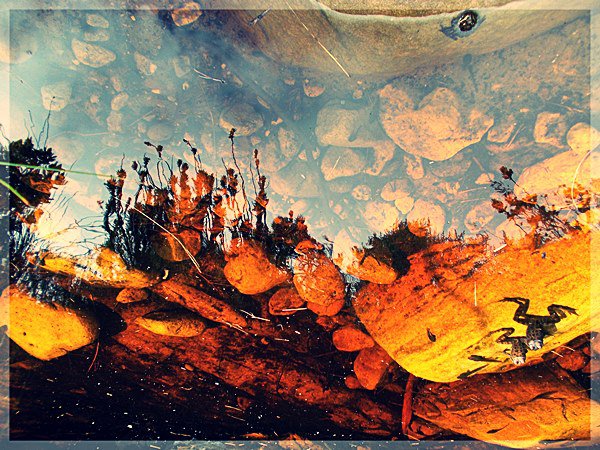 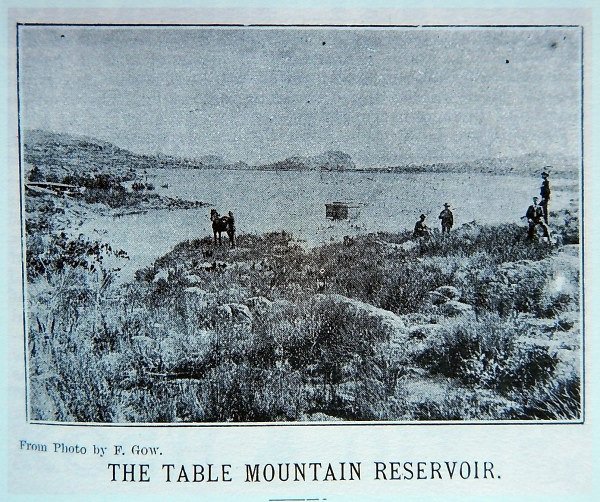 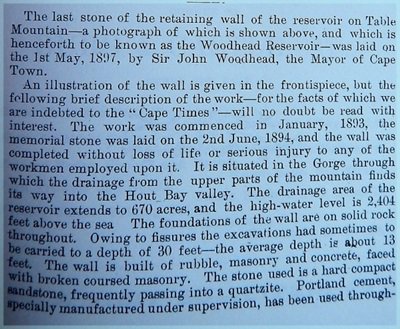 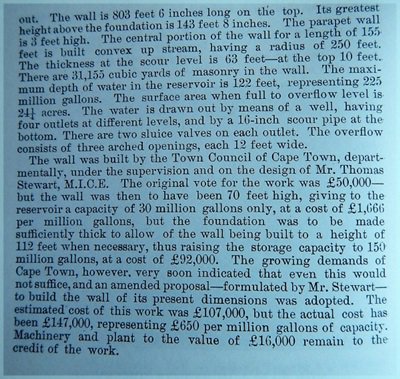