'We start the journey with soothing music,' said a lady announcer, and a folk tune floated from the train's loudspeakers as we pulled out of Hong Kong. Ignoring it, a young passenger picked up his guitar and started strumming Lennon's Imagine.

Passing midwinter scenery was of towns with fewer cars than bicycles, thousands of them, all shrouded, so I imaged, in grey fog which later I realized was smog. '... and the world will be as one ...' the young man sang.

Early next morning we were hustled into a taxi. Finding a place to stay was an ordeal. Visitors to China were only allowed to stay at designated hotels.

The city was densely populated with poor people. Something in the air stung our eyes. On a pedestrian overpass I spotted a tiger or a lion's paw for sale. We saw no westerners. No-one spoke English. Even Nicole, the better Mandarin speaker between us, battled to communicate.

Two days passed while organizing passage down the Yangtze. We'd leave from nearby Yichang, where the air smelled of a million fires. In a scrappy park groups of elderly people played cards. Tai-chi practitioners holding swords were all in flow. 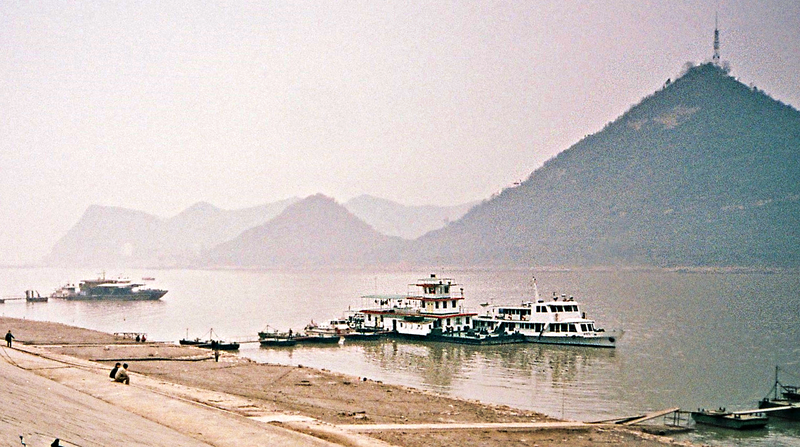 Dozens of people were waiting at the jetty. The ferry was late. A man in a leather jacket took our ticket and we edged through the intense crowd. The ferry filled up fast; passengers sat in dingy passageways'. People spat. The floors were grim.

Deckhands dressed in double-breasted suits with brand-labels still stitched on the cuffs cast us off at 8.15pm. We then returned to the river bank get the bags, buckets, sacks and suitcases of a new round of passengers. We left again at about 10.30pm. 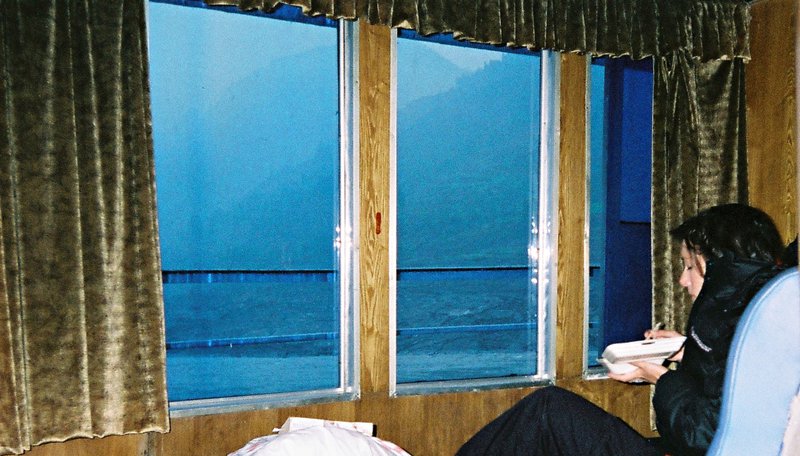 Except for a repellent canteen I can't recall any other in board amenities. Brown water came from our en-suite twin-berth's tap. Yet the privacy, and the plastic windows, old curtains, and cold though dry metal floor were luxuries compared to what our fellow passengers had.

Smog-laden Dickensian drudgery seemed to be the riverside residents' lot. 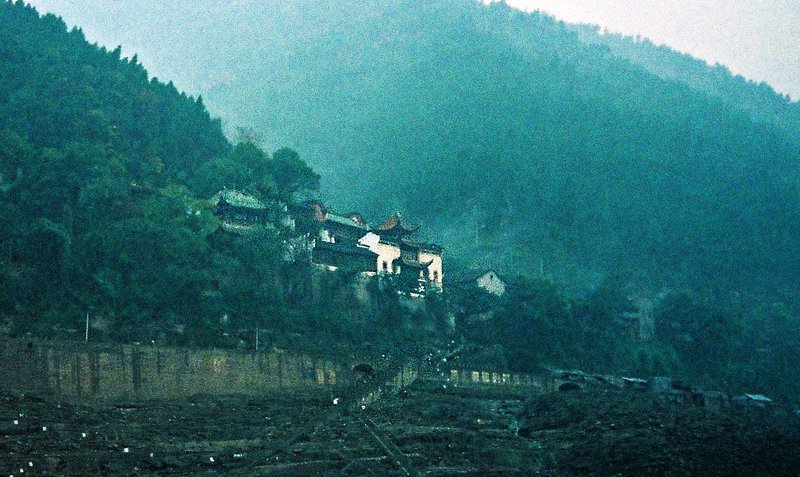 China's re-invention, this crossing of a river by feeling for stones, as goes the saying attributed to Chairman Deng Xiaoping, was more like a hard, desperate groping, as the floodgates in Beijing had opened and the currents of some sort of market economy were now in full flow. 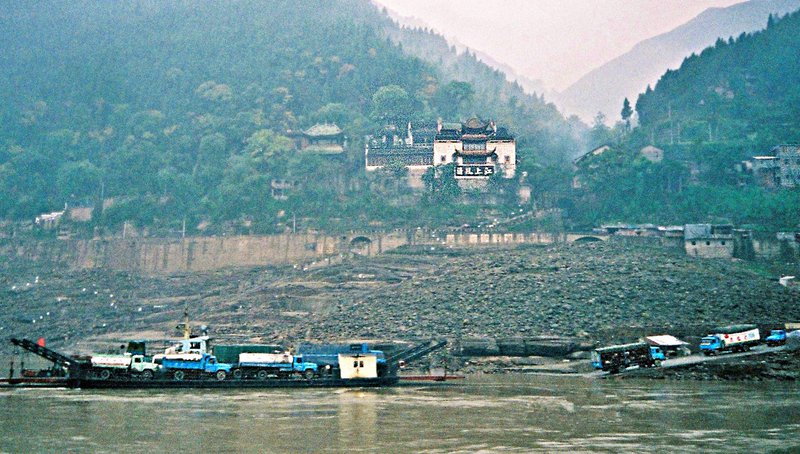 The scale of infrastructure being installed was impressive. Bathed in eerie late-night floodlit-orange we floated through a narrow concrete passage of locks so huge one of them held several massive vessels. 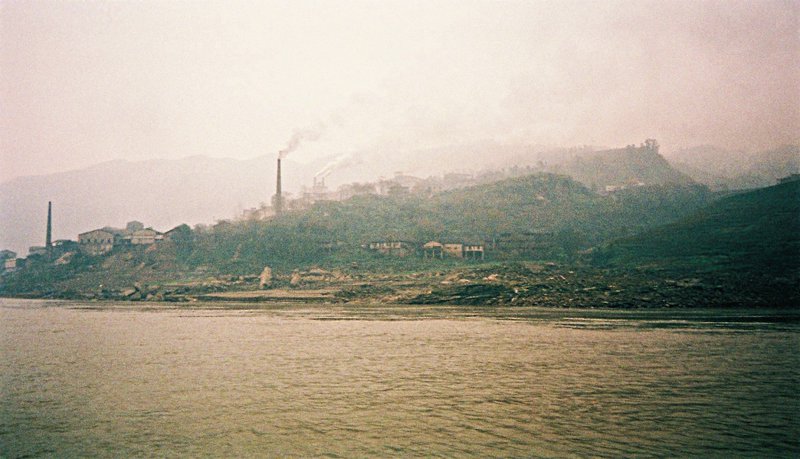 Songlines of the Yangtse

Those locks were dwarfed in geologic scale when in the early hours one morning we navigated the doomed trio of the San Shan gorge, soon to be flooded to form the world's largest dam. The 3 Gorges' massifs loomed gloomily over us while a lone twilit man stood on a remote midriver mudbank, draped in rough sackcloth, swishing a net through the Yangtse's cold dun-coloured turbulence.

I went back to bed.

And in Songlines the book I was reading by Bruce Chatwin, he recounts how travelling in Yunnan in the mid eighties he met an old teacher who could hum Chopin's mazurkas and Beethoven symphonies. While I read, a ghetto blaster in the passageway outside our cabin started playing Michael Jackson's Dangerous. During the Cultural Revolution, Chatwin wrote, the old Yunnanese teacher's interest in western culture resulted in his twenty one year imprisonment.

The passageway music continued throughout the day. It was mostly Chinese pop bristling with western influences and production values. 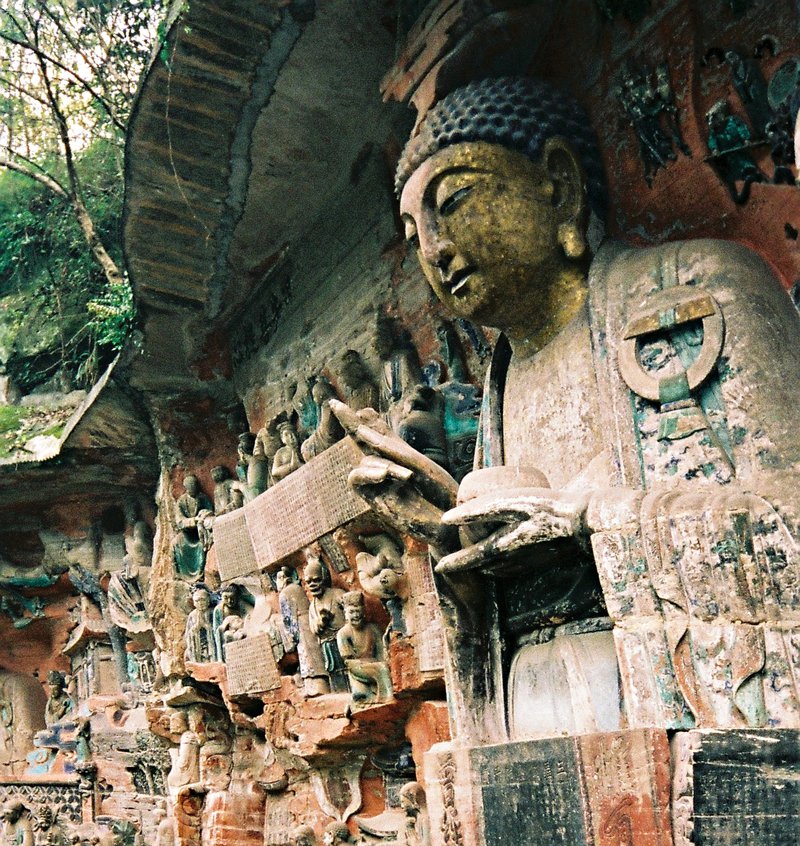 In the twenty-two years since we were there Chongqing's skyline has been my google go-to for a quick visual reminder of China's rapid change. 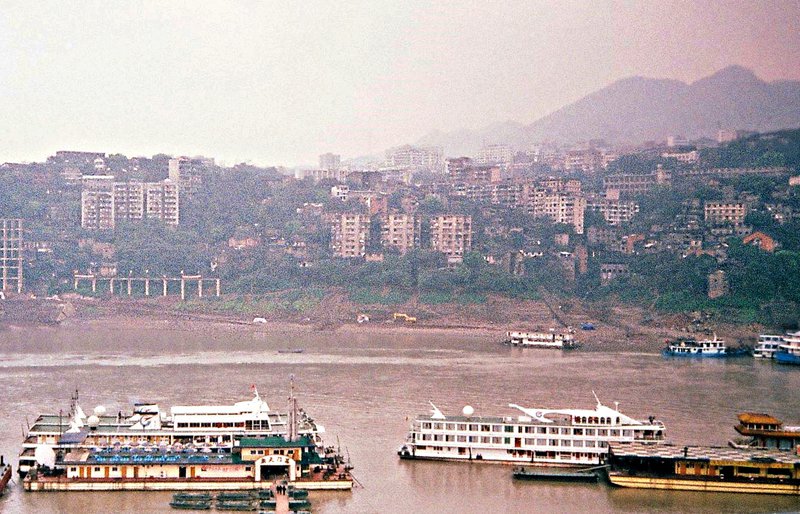 In late 1999 its commercial district was drab except for a small section deep downtown where signs of old Deng's orders to to get rich quick were being met in the form of western shopping-malls. This was ground zero of what in the next decade would be identified as the planet's fastest growing metropolitan region.

A man wearing a Santa suit was positioned outside a shop. Christmas tunes were in the air.

We took a cable-car across the river and walked alleyways, and visited a park. Amid trees and mossy ornate stones and ponds and tea gardens where people were out with their kids and caged birds, we met two English teachers. They showed us their school, then took us to eat the local Sichuan hotpot. The fried-oil-dipped dofu, seaweed, mushrooms and veg was delicious yet so spicy that at times I became too phlegmy to breathe or speak. 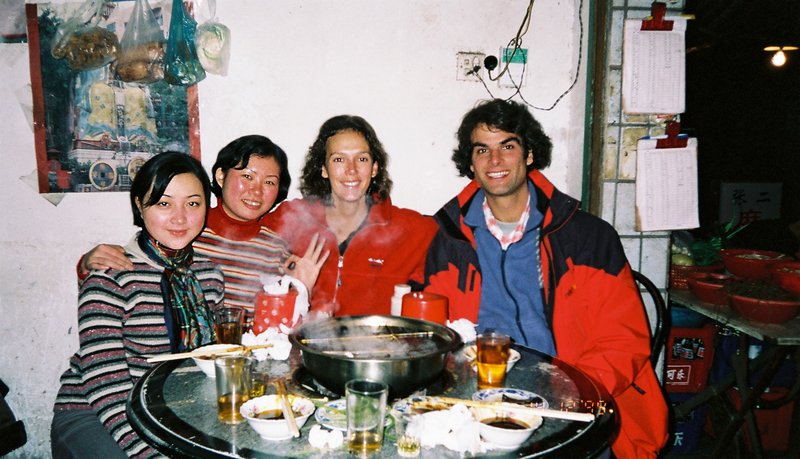 The 'hard sleeper' bus we caught out of Chongqing had permanently reclined seats and dirty blankets. With so much cargo piled around us in the aisles, in the case of emergency there was no obvious means of escape Along the city's riverside boulevard there were home-appliance repairers and small shops housed in ex bomb-shelter caves .

A town where we overnighted had the street poles with mounted speakers broadcast tinny programming all over the place.

Poor people kept asking for help. The better parts of us atrophied further in denying such simple requests.

We walked out to farmlands with few roads, where crops were fed night-soil ladled out of pales hung either end of shouldered poles. The sound of wood chopping, voices calling, chickens crowing, beasts lowing, and the crackling of a neighborhood temple's fireworks was preferable to the programming coming from the town's public address system.

From places like this, I imagine, many young people were being drawn from to work in distant industrial regions. Details would punctuate the China-rising tale over the following decade, of factories with nets installed below windows to catch suicide attempts. 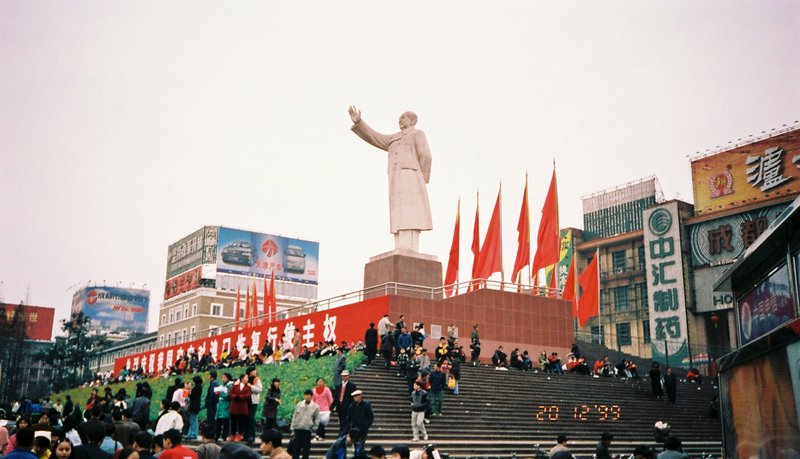 Movement of Thought and Remote Socket Confusion in Chengdu

Ten days on the routes-less-travelled meant not having to deal with the official 'Travelers' Agency'. That changed in Chengdu where we stopped for permit and onward passage to Tibet. Fares were double priced.

Trying to find out a cricket score I could not reach occidental news sites at internet cafe computers. They just returned an error sign: The remote sockets seem confused.

Unlike the old Soviet Union and other such systems, China, still led by 'communists', does not have to use material walls to restrict its citizens movemnt. Apart from its repressed minorities, most of its people, if they can afford it, are able to come and go.

A virtual wall is what concerns the Chinese leaders. The confused remote socket was, I think, an early version of the famous internet firewall that may be more consequential than the Great old one.

Turning to local official paper-based news I read something which helped me understand Deng's new China a bit more:

"... Zhang Bin developed a keen sense of Justice when he was a young boy. One day at primary school, he saw a higher grade boy try to break a coin with a knife and went and stopped the boy.

"It is none of your business. I can break my own money," the boy said.

"No one is allowed to break renminbi. You break the law if you break the coin," little Zhang said with the force of justice.

However, I think I only truly understood the story of young Zhang and the foresight of the Chinese security planners twenty one years later on seeing this headline:

The Red flag flew over the airport in Lhasa, and was prominent throughout and in other towns ... TO BE CONTINUED