Cape Town's R35 million medicinal plant trade is driven by a network of herbalists that stretches up the east coast into the Transkei. It has roots in Khoi and San traditions and African nationalist ideology. Some harvesters of plant medicines talk about their work with a missionary zeal - of wanting to heal the nation of its overuse of 'chemicals'.

Were this vision realized, how would the Western Cape's ecological balance change? As it is, the trade in locally harvested herbal and animal-derived medicine is a threat to the unique experiment that is the re-wilding of Table Mountain.

This struck me one afternoon having pedaled up to Signal Hill to see a post-fire regrowth.

I heard the two young men at work before I saw them; the clink and scrape of tools on earth.

Some call themselves sakmanne - sackcloth men. 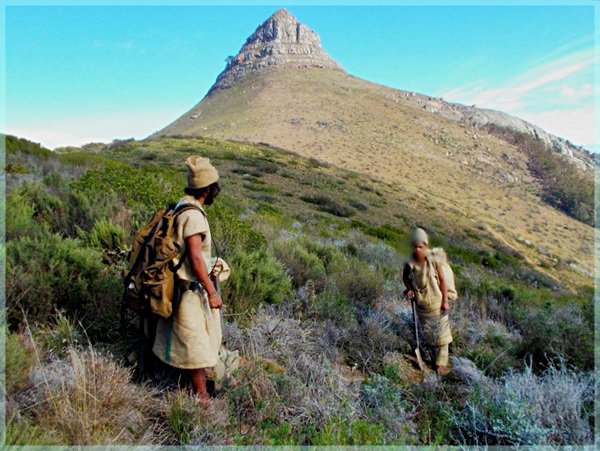 Once they'd posed, I realized this photo could get them into trouble. Probably they knew it too. Arrests were made a few years ago by Cape Nature when confiscating 16 000 recently-harvested wild garlic bulbs. But my subjects' restated belief in divine guidance drives them on. Their demeanour is guardedly defiant and determined; it's in the look in their eyes ( face redacted in the above picture.)

In the Lord's eyes they are doing no wrong. There are, they told me, many old people in need who cannot come to the mountain. The renosterbos they were hacking and stuffing into large canvas backpacks is a hot seller down at sea level, where five thousand traditional healers are said to be working in Cape Town's townships. The bush is used to treat TB, cancer, and restore strength in the bones.

Once these bare-footed men had moved off, a smallish patch of scarred earth was disturbed on the part of Signal Hill I'd photographed them on. This is not much when compared to the increasing acreage of wine farms and the urban creep of the well off.

Conservationists, however, say that up to seventy percent of wild harvested plants are either killed outright, or rendered reproductively disabled. 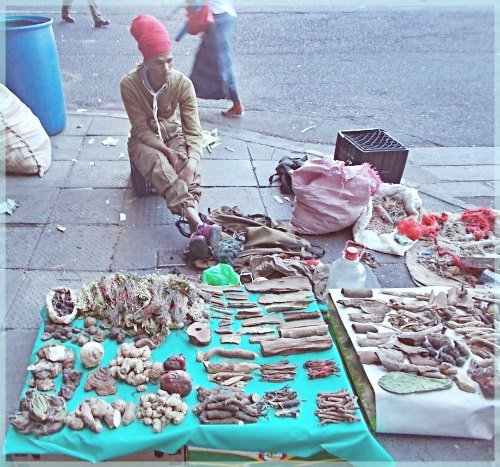 A hot seller is Buchu, (pictured being served in photo below). It's prescribed by traditional healers as a general tonic, or as a diuretic for urinary tract infections, as well as for TB. It is rarely seen growing wild. Some bushes exist in crazy-to-get-to Table Mountain nooks, and in deep Boland gorges. Chuck some leaves in a bottle of brandy or water bottle and let it steep a while to lend it a minty, slightly turpsy taste. It also makes an interesting tea. 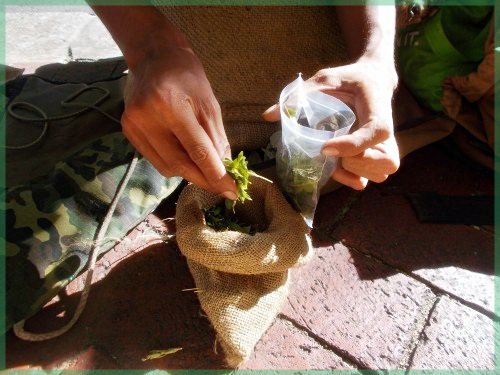 Many local plant remedies are used for common ailments. They also aid spiritual quests: African Dream Root helps get in touch with ancestors.

The sakmanne Rastafarians I spoke to learn from their ancients, and books, the Church of Garvey, and certain festivals, as they travel town-to-town, city-to-city.

Some may also delve into manuals of worldwide snake-oil-manship: one plant-medicine seller in the market, in tones of clairvoyant sympathy, offered me a root that would remedy premature ejaculation. I bought the buchu.

What isn't sold on the streets is bought by traditional healers in the townships, or sent up-country. Wild medicine plants are also imported from other parts of South Africa.

Also included are 198 animal species. The sackcloth Rastafarians, who eat what they refer to as 'a clean diet from the fire', are however mainly vegetarian, and don't seem to sell dead creatures.

As to how many people consume all of this? Some say about 40 percent of South Africans visit traditional doctors every year. Others claim a far smaller percentage.

In total, approximately R170 million worth of traditional medicines are traded each year in Cape Town. And beyond the direct benefits of taking these medicines, their trade is a vital informal sector providing livelihoods to thousands of economically marginalized people. And the mountains' bounty gives not only medicine. Firewood, building material, and flowers come from it too. 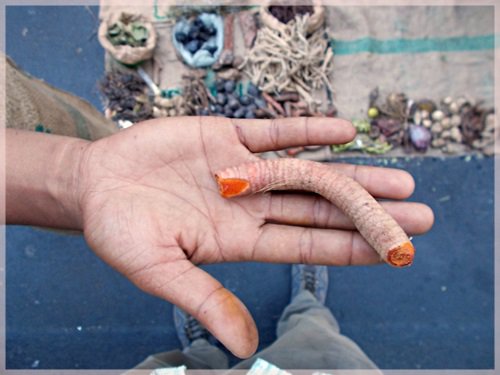 How can it hold up?

Cape Town's population is growing. One hundred and fifty thousand people a year move here from the Eastern Cape. Often from rural backgrounds, many have a stronger preference for traditional medicine. This places increasing demands on the ecosystem.

The Lord-will-provide say some sakmanne. A similar faith is shared by local abalone harvesters I've spoken to. How's it possible, they say, that the vastness of the ocean and Allah's benevolence will ever dry up?

That may be seen as a naive view of nature's self-sustainability. But the pared-back way of life of the Cape Rastafarian sakmanne, their anti-materialism, leaves a comparatively small footprint. And an example to the rest of us. 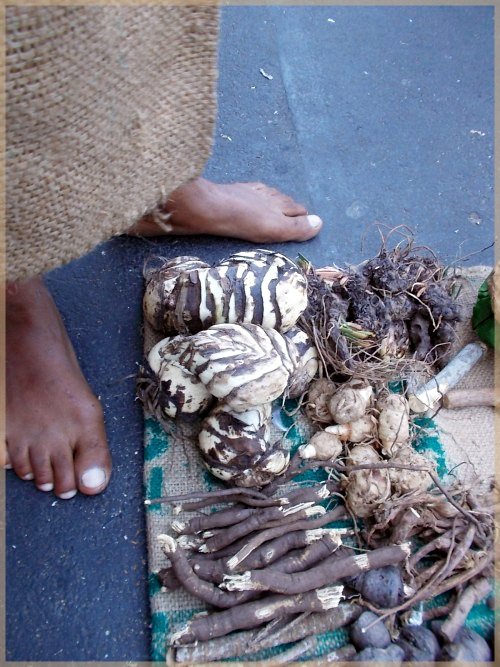 Here's a short bio of a Cape Town herbalist.